THIS IS A PREORDER!
THIS ITEM STARTS SHIPPING ON OR AROUND DECEMBER 17TH, 2021

Hailing from Portugal, PHENOCRYST was formed in early 2020 by D.S. (Archaic Tomb, Summon) and P. Tosher (Extreme Unction, Scum Liquor, ex-A Tree of Sign), with N. (Summon, Sepulcros, Concilium) and V.M. (Systemik Violence, Necrobode) joining later on, during the recording of their debut EP. The band is based in the outskirts of Lisbon, and the origin of such conjuration is a rigorous consequence of a vibrant underground activity in the city.

D.S. and P. Tosher wanted to create the foundation of a death metal act crossing other influences like doom and some psychedelic vibes, to illustrate soundscapes of disastrous, catastrophic, and annihilating volcanic and natural events. There are not many artists actually singing about this specific topic, if any, and therefore, the lyrical content is also something to explore. As such, the moniker PHENOCRYST is fitting.

Aptly titled Explosions, PHENOCRYST now reveal their debut recording. Totaling five tracks (one instrumental) over 23 minutes, Explosions unsettles with preternatural ease, reeking of death stench and obscure delirium. PHENOCRYST are proudly and purely death metal, but are emboldened in their liberation to explore within this rich language: Only Death is Realer.

Indeed, Explosions is an explosive event, and one which marks PHENOCRYST’s forthcoming debut album, which is currently being prepared. Take the first step into their burnt lands… 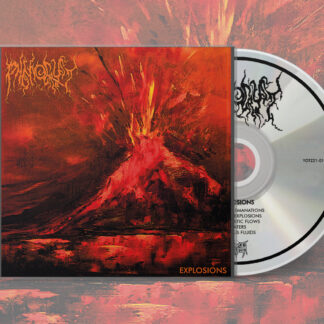 You're viewing: PHENOCRYST – Explosions CD 100.00 kr
Add to cart
We use cookies on our website to give you the most relevant experience by remembering your preferences and repeat visits. By clicking “Accept”, you consent to the use of ALL the cookies.
Cookie settingsACCEPT
Manage consent