“Funeral Bitch recorded two demos with me and we split up. I liked the arrangements of this music, because more Punk ideals were prevalent in the music. Alex [Olvera] was an intersting character, while Pete Thompsen was a total drunk, and it just seemed to work. The most famous shows were with Death at the infamous Exit Club in Chicago to 20 people, and later with the Cro-Mags and about 300 people at the Cabaret Metro, still in existence today. The bass was so loud that the Chicago Police came and nearly arrested me. The Double Scoup PA bin with JBL’s were a bit too much I guess. This was the perfect bulldozer, and the Cromags loved it. Funeral Bitch was created after the recording of the Death Strike and Master demos a year later in 1986. Master was short-lived in the beginning. Funeral Bitch was a project with the guitarist Alex Olvera from the band Assault. We began as Assault and Alex said we should change the band name to Funeral Bitch. I accepted his idea and we recorded a few demos. This was also short-lived as I had begun practicing with Aaron Nickeas late nights after Funeral Bitch practice and we started a band called Abomination. I really just stole the drummer from this band called Abomination and Nickeas stole the name. Later, members of the past two bands got together and came up with another soon to be legend from Chicago called Funeral Nation.” – Paul Speckmann (2011) 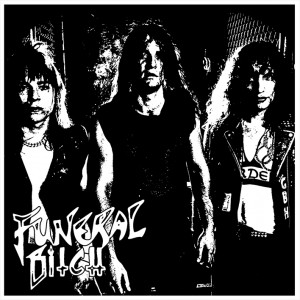 You're viewing: FUNERAL BITCH – The Demos 7″EP (Red Vinyl) 65.00 kr
Add to cart
We use cookies on our website to give you the most relevant experience by remembering your preferences and repeat visits. By clicking “Accept”, you consent to the use of ALL the cookies.
Cookie settingsACCEPT
Manage consent