THIS IS A PRE-ORDER! THIS ITEM STARTS SHIPPING ON OR AROUND MAY 20TH.

BLOOD HARVEST RECORDS is proud to present the highly anticipated debut mini-album of Poland’s CLAIRVOYANCE, Threshold of Nothingness, on CD, 12″ vinyl, and cassette tape formats.
CD and Cassette will be released on May 20th. Vinyl will be out later during the year. Update will follow. 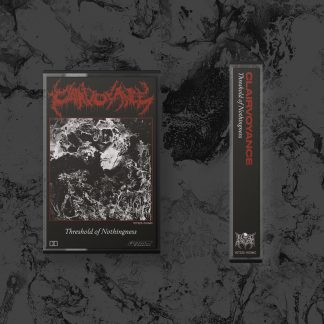 You're viewing: CLAIRVOYANCE – Threshold Of Nothingness CASSETTE 80.00 kr
Select options
We use cookies on our website to give you the most relevant experience by remembering your preferences and repeat visits. By clicking “Accept”, you consent to the use of ALL the cookies.
Cookie settingsACCEPT
Manage consent