View cart “BURIALKULT Evil Antichrist Hordes 7″EP” has been added to your cart.

BURIALKULT was formed under a cold fullmoon union between Phlegathon (vocals), Funeral Aggressor (Bass) and Imperion (Guitar) in the wastelands of Canada in 2011 to spread the words of Luciferian Khaos and destruction.
Soon after, the line up was solidified by Dominus on drums. It was then that BURIALKULT was epitomized as an un-holy kult and released a three song demo titled “Perverting The Altar” and under the black banner of sorcery perform unholy black-metal perversion.
BURIALKULT continues their unending war with new battle-craft and occulting Satanic Metal art… 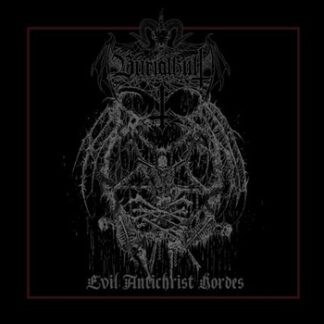 You're viewing: BURIALKULT Evil Antichrist Hordes 7″EP 50.00 kr
Add to cart
We use cookies on our website to give you the most relevant experience by remembering your preferences and repeat visits. By clicking “Accept”, you consent to the use of ALL the cookies.
Cookie settingsACCEPT
Manage consent