Chile’s CEREMONIAL was spawned in early 2010 from the ashes of previous native black metal projects and their undying need for creating metal. The band was formed and named by Imprecator (guitar/bass) and Lucifago (vocals/guitar). Not long after, Bliol (ex-Gorhoth) joined on drums and completed CEREMONIAL’s first unlight trinity. Soon afterwards, Yelworc(k) (Ereshkigal, Hell’s Veins) joined the circle on bass guitar and fully completed the band.

CEREMONIAL’s main aim is to crush and mock the origins of ignorance, create original occult lyrics, and the magickal execution of hermetic black/thrash metal. They do so, with iron-fisted force, on a brand-new, hellthrashing 7″ entitled Ars Magicka. Across their two preceding demos, CEREMONIAL may have shown lethal potential, but here on Ars Magicka, they explode with diabolic force: four songs of cruel, chaotic mastery. 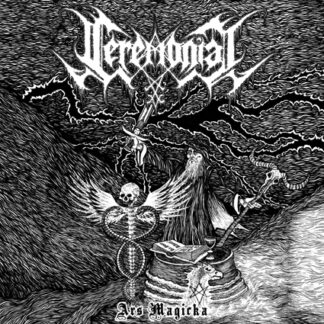 You're viewing: CEREMONIAL – Ars Magicka 7″EP (Black Vinyl) (Blood Harvest) 50.00 kr
Add to cart
We use cookies on our website to give you the most relevant experience by remembering your preferences and repeat visits. By clicking “Accept”, you consent to the use of ALL the cookies.
Cookie settingsACCEPT
Manage consent