On the back of two hotly received demos – 2014's Dystheism, which BLOOD HARVEST later released on 7″ vinyl, and 2015's Cyclical Descent of Causality – California's VOIDCEREMONY have been patiently perfecting their craft. Although both demos were suitably rough in production, the execution was flawless – and fierce. Now, with the release of Foul Origins of Humanity, VOIDCEREMONY have at last fully capitalized on their mesmerizing, mind-bending potential. Everything that made those two demos special have been taken to extremes here, and with extreme focus and finesse: blackened death metal sprawling with labyrinthine technicality and endless corridors of unexplored realms. Foul Origins of Humanity is just as much a dizzying, bilious beast, VOIDCEREMONY's songs here twisting and contorting in ever-more-obscene ways, but now captured with a clarity that's absolutely blanching to behold.

The Foul Origins of Humanity are here, and VOIDCEREMONY have thrown down the gauntlet…that is, until their forthcoming debut album for BLOOD HARVEST arrives. 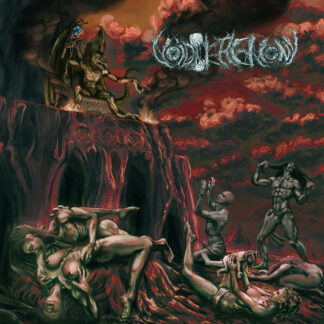 You're viewing: VOIDCEREMONY – Foul Origins Of Humanity MCD (Digi) 100.00 kr
Add to cart
We use cookies on our website to give you the most relevant experience by remembering your preferences and repeat visits. By clicking “Accept”, you consent to the use of ALL the cookies.
Cookie settingsACCEPT
Manage consent