THRONEUM play blackened, nightmarish Death Metal the old way. Raw and straight to the point. They are heavily influenced by early Death metal bands from the 80’s and early 90’s like ASPHYX, ORDER FROM CHAOS, VENOM, POSSESSED, early SODOM, HELLHAMMER and so on. Yet they sound is still something fresh. Another dark & ugly material of old-school Death/Black Metal band.
Limited to 300 copies. Comes with back-patch.

Be the first to review “THRONEUM – Mutiny Of Death PICT.LP” Cancel reply 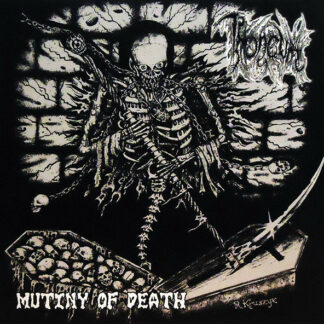 You're viewing: THRONEUM – Mutiny Of Death PICT.LP 100.00 kr
Add to cart
We use cookies on our website to give you the most relevant experience by remembering your preferences and repeat visits. By clicking “Accept”, you consent to the use of ALL the cookies.
Cookie settingsACCEPT
Manage consent