Select edition or bundle below.

BLOOD HARVEST RECORDS is proud to present a brand-new EP from NEX CARNIS, Black Eternity, on 7″ vinyl format. Hailing from Iran and with an album and demo to their name, NEX CARNIS are a steadily rising force, wisely parceling out their releases – Black Eternity makes three total since 2012 – and delivering quality over quantity every step of the way. This new two-song 7″ is no different, and shows that NEX CARNIS are effortlessly making their Metal of Death craft that much more powerful and provocative. Utterly dark and disgusting, hammering and dizzying in equal measure, Black Eternity indeed sounds much like its title and suitably drags the listener down into labyrinth after labyrinth of untold horror. And yet, for however vile 'n' virulent the band's brand of death metal may be, there's a strangely hummable magick to it that further elevates NEX CARNIS' classicism. Behold Black Eternity and begin drowning in DEATH! 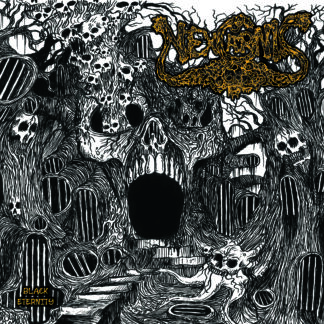 You're viewing: NEX CARNIS – Black Eternity 7EP 75.00 kr – 130.00 kr
Select options
We use cookies on our website to give you the most relevant experience by remembering your preferences and repeat visits. By clicking “Accept”, you consent to the use of ALL the cookies.
Cookie settingsACCEPT
Manage consent