MASTER OF CRUELTY – Archaic Visions of the Underworld LP

Taking all the same elements that made Spit on the Holy Grail such a hot commodity with underground diehards – stutter 'n' surge battery, tortured-tonsil exhortations, and a ceaselessly swirling carnage of riff 'n' rhythm – and amplifying them further, MASTER OF CRUELTY render Archaic Visions of the Underworld a study in what makes death and black metal from South America so special, and so enduring. Like an unholy marriage of early Morbid Angel, Vulcano, and Chile's Pentagram, Archaic Visions of the Underworld explodes forth in a sulfurous haze of tangible EVIL and otherworldly vibration; it is both mercilessly violent and also equally atmospheric. And yet, through it all, MASTER OF CRUELTY never forget the METAL aspect of the black/death cult, and command obeisance to possessed headbanging, claw-raising, and air-riffing. It's a wild ride into the very underworld itself.

A statement from the band reads as thus: “Archaic Visions of the Underworld is deeply submerged in the unholy spine of Mantos, which represents what MASTER OF CRUELTY bleeds and kills for. Our sonic evil universe has been expanded into a much more profound, obscure atmosphere where restless violence and doomish paraphernalia shall always prevail. We invite only the sick demons of the underground to enter the realm of savage Paraguayan madness with the eight unedited tracks craving from the entity MAESTRO DE LA CRUELDAD.” 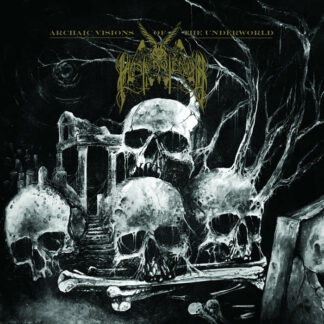