THIS IS A PREORDER. THIS ITEM STARTS SHIPPING ON OR AROUND NOVEMBER 25TH, 2022.

Formed in 1996 in south Florida, HIBERNUS MORTIS were something of a cult fixture in the American death metal underground during the late ’90s. A demo and a live album spread their name across that underground, and their debut album, The Existing Realms of Perpetual Sorrow, finally arrived in 2002. An unreleased demo was recorded a year later, but sadly, the name HIBERNUS MORTIS drifted into dust as lineup shuffles squandered the band’s momentum.

But, of course, DEATH metal is eternal (life is not!), and now HIBERNUS MORTIS return from their graven slumber with a perfectly titled second album: The Monoliths of Cursed Slumber. With a revitalized lineup which features ex-Gigan guitarist Randy Piro and veteran drummer Cesar Placeres alongside OG members Ralf Varela (vox, guitar) and Yasser Morales (bass), HIBERNUS MORTIS here create a gutsfucking whirlwind of authentically ’90s-vintage death metal. From downtuned gallop to cyclonic breakdown, from surge to slam, eerie dissonance to gutter-steeped doom, all pure ‘n’ proper bases are covered – and then brutally beaten down with cold, cruel precision. It’d be simple to say that The Monoliths of Cursed Slumber sounds like not a year has passed since the band’s original but….well, that’s pretty much the truth, and HIBERNUS MORTIS swarm and crush with an intensity that belies their age.

To restate the obvious, death metal is ETERNAL, and so is HIBERNUS MORTIS’ muse. Awaken and enter The Monoliths of Cursed Slumber! 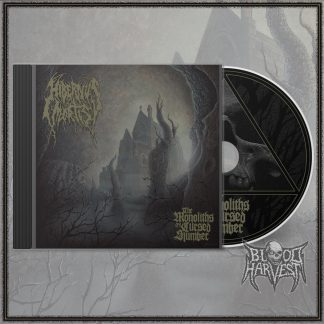 You're viewing: HIBERNUS MORTIS – The Monoliths Of Cursed Slumber CD 120.00 kr
Add to cart
We use cookies on our website to give you the most relevant experience by remembering your preferences and repeat visits. By clicking “Accept”, you consent to the use of ALL the cookies.
Cookie settingsACCEPT
Manage consent