THIS IS A PRE-ORDER. THIS ITEM STARTS SHIPPING ON OR AROUND JANUARY 27TH, 2023.
Please observe! – This image is only a sample-preview and NOT the final product. Final color effect results might differ!
Comes in gatefold cover.

Formed in 2019, the ascent of Canada’s GUTVOID has been nothing if not meteoric. The Toronto natives digitally released their debut EP, Astral Bestiary, later that autumn and came to the attention of BLOOD HARVEST, who then released it physically in 2020. And for good reason: ominously swarming, GUTVOID churned forth a world-eating Metal of Death that duly devoured the listener whole. More than being a three-song/24-minute soundworld unto itself, Astral Bestiary was a statement of intent from a bold-yet-pure DEATH METAL band.

Continuing that momentum was the even-bolder “Forbidden City Beneath the Crypt” digital single later in 2020, and the absolutely gelatinous Four Dimensions of Auditory Terror four-way split shared with BLOOD SPORE, COAGULATE, and SOUL DEVOURMENT, underlining GUTVOID’s slimy, mind-mangling roots. The stage was thus set for the inevitable full-length debut…

And now it arrives bearing the ominous title Durance of Lightless Horizons. Immediately, this titanic recording bears the hallmarks of the still-fresh GUTVOID sound: heaving, vertigo-inducing, spiraling like tar-thick smoke. And yet, the sterling sense of clarity the quartet only hinted at before takes full flight here; Durance of Lightless Horizons entices and then entrances the listener with a yearning, come-hither sort of melodicism underpinned by both melancholy and malice. That the execution has somehow tightened up even more – truly, GUTVOID’s chops were exemplary before – allows these doom-drenched ruminations to cut sharper than ever, giving even the most stuck-in-quicksand passages to impart palpitating movement. But, rest assured that the songwriting across Durance of Lightless Horizons is an ever-so-patient one; linear to the very end, each passage conveys its sensation and then slithers into the next with a grace quite at odds with such a gutted sound.

It is not hyperbole to suggest that Durance of Lightless Horizons is one of the most fully-formed death metal debuts in recent memory. To celebrate its grand arrival, BLOOD HARVEST will also be doing a limited run of Ancient Bestiary on vinyl with the previously digital-only “Forbidden City Beneath the Crypt” included as bonus. This is indeed the year of GUTVOID. 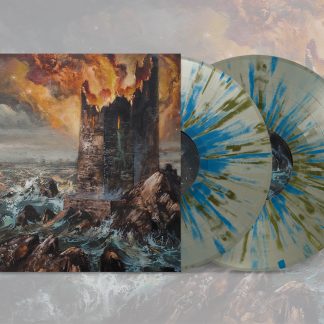 You're viewing: GUTVOID – Durance of Lightless Horizons DLP (Water) 265.00 kr
Add to cart
We use cookies on our website to give you the most relevant experience by remembering your preferences and repeat visits. By clicking “Accept”, you consent to the use of ALL the cookies.
Cookie settingsACCEPT
Manage consent