Limited to 200 Regular Black Vinyl.
Featuring all the members from Oath div. 666, Canadian quartet DISEMBODIMENT make their debut with Mutated Chaos, one intro and five huge tracks of filthy and rancid Death Metal!
Disembodiment is a four-piece death metal band from the sewer ruins of Sherbrooke, Québec, Canada, featuring all four members of Oath div. 666.
The band was formed in 2020 after it was decided to start a new band because the new lyrical themes (death, oblivion, horror, nightmares and dark fantasy) would not fit the former band.
The band also distanced themselves away from the Boss HM2 sound which was at the core of their former band, they opted to go for filthier and heavier sonic tormentation.
For fans of Incantation, Rottrevore, Grotesque Infection. 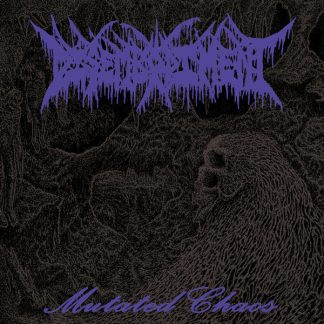 You're viewing: DISEMBODIMENT – Mutated Chaos 10″MLP 165.00 kr
Add to cart
We use cookies on our website to give you the most relevant experience by remembering your preferences and repeat visits. By clicking “Accept”, you consent to the use of ALL the cookies.
Cookie settingsACCEPT
Manage consent