DÉMONOS is an uprising Black Metal/Avantgarde band and is deeply rooted in the spiritual heritage of its home country India. It derives ancient esoteric wisdom from occult, nature & theology, which are then channeled in a very dark style of music, which barely comparable to something else. High priest Démonos Obscurís summons demons and enshrouded parapsychological spirit-beings – and they all follow the call!

This is the first demo of this coming act, titled “From Sacred to Profane”. It is now brought to you on tape by Dunkelheit Produktionen. In there you’ll find some of the most irresistible and absorbing Black Metal, songs in between inspirations gained from Ritual Rock and raging speed excesses, produced with a massive bass. Apart from every modernity DÉMONOS present their own idea of possessed blackness, manifested in this demo. These hymns of transcendence can be described as an unheard mix of the abyssal and asphyxiating DEFUNTOS, the misanthropic anti-civilisationist movement of LIFELOVER and the occult intensity and classic massiveness of PEST’s “Dauðafærð“.

Limited to 100 cassettes in dark-grey with silver print. 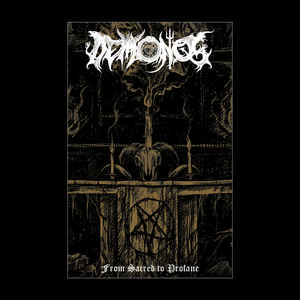 You're viewing: DÉMONOS ‎– From Sacred to Profane CASSETTE 70.00 kr
Add to cart
We use cookies on our website to give you the most relevant experience by remembering your preferences and repeat visits. By clicking “Accept”, you consent to the use of ALL the cookies.
Cookie settingsACCEPT
Manage consent