A 2CD edition containing CADAVEROUS QUARTET extremely rare and sought-after-debut album, 1994’s The Extinction Agenda – which goes for crazy collectors prices – and their two earlier demos, 1991’s Corpses Breathing Singing and Dancing and 1993’s Know Your Coroner. A throttling example of American death metal in the early ‘90s, CADAVEROUS QUARTET maintained a sound that showed shades of classic Malevolent Creation, early Gorguts, and even Death before they went all prog, but all done with extremely efficient songwriting and thoughtful (and topical) lyrics. Not overly polished but neither too raw, The Extinction Agenda is the lone full-length snapshot of what the band were – and what they could’ve become. The two preceding demos include earlier versions of a few songs that ended up on the album, and prove that CADAVEROUS QUARTET were worth reckoning from the very beginning. 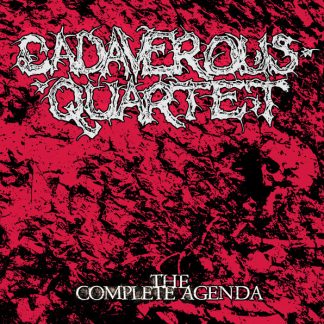 You're viewing: CADAVEROUS QUARTET – The Complete Agenda 2xCD 145.00 kr
Add to cart
We use cookies on our website to give you the most relevant experience by remembering your preferences and repeat visits. By clicking “Accept”, you consent to the use of ALL the cookies.
Cookie settingsACCEPT
Manage consent