THIS IS A PREORDER!
This item and orders including this item, will ship on or around May 11th, 2018

Hailing from North Rhine-Westphalia, Germany, ABYTHIC formed in 2015 and soon recorded & released their first demo, A Full Negation of Existence. Aptly titled, the demo portrayed four foul tracks of churning death metal of a most early '90s mold. Alas, that was an all-too-brief teaser for Beneath Ancient Portals, the band's full-length debut. Also aptly titled, Beneath Ancient Portals sees ABYTHIC taking the demo's same rudiments – patient and pulsing riffing, linear composition, an emphasis on doomy downtempo segments – and brings them to fuller fruition, diving deeper and deadlier into thundering, desolate DOOM. In many ways, Beneath Ancient Portals often recalls the proud 'n' powerful class of mid-period Bolt Thrower, Asphyx, Grave, and Pentacle, so hypnotically heaving is their dreadnought weight here. But in other ways, ABYTHIC put their own stamp on doomy death metal through a potently occult aura…or one that sounds like a crypt slowly opening, all before a rust- and blood-covered tank rolls forward out of it, crushing all in its path. It's simply mesmerizing either way.

Completed by absolutely devastating production, Beneath Ancient Portals will surely be hailed as one of the year's best and mightiest death metal debuts. Old school, new school, no school: nothing matters but sheer devastating weight, and ABYTHIC possess a fuckton of it. 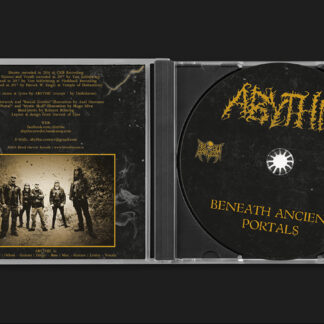 You're viewing: ABYTHIC – Beneath Ancient Portals CD 120.00 kr
Add to cart
We use cookies on our website to give you the most relevant experience by remembering your preferences and repeat visits. By clicking “Accept”, you consent to the use of ALL the cookies.
Cookie settingsACCEPT
Manage consent