As part of an onslaught of new short-length assaults, BLOOD HARVEST RECORDS is proud to present ZIGGURAT’s Ritual Miasma on digipack CD and 12″ vinyl formats.

ZIGGURAT are a black/death duo from Israel. Begun in 2015, they’ve been quietly building upon a foundation that has lain dormant until now, with the release of their debut EP. Aptly fucking titled Ritual Miasma, ZIGGURAT conjure corrupting riffs and terrorizing screaming, backed by ever-explosive and propulsive drumming. A truly morbid experience, the five tracks comprising Ritual Miasma indeed induce a miasma that’s ritualistic, burrowing deep within the subconscious with a pulsing bestiality. Unlike their so-called “bestial” brethren, however, ZIGGURAT do not hide behind obfuscating cavernousness; instead, each construction is disarmingly clear and immediately engaging. No-bullshit potency lies at the heart of this Ritual Miasma.

With the cassette version soon to be simultaneously released by comrade Caligari Records and an imminent debut album for BLOOD HARVEST, ZIGGURAT make a grand, gutted entrance with Ritual Miasma. 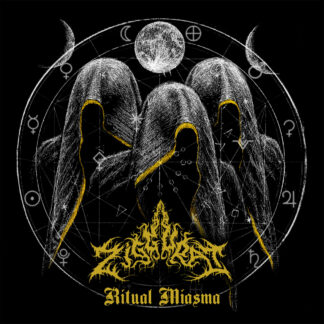 You're viewing: ZIGGURAT – Ritual Miasma MLP 140.00 kr – 330.00 kr
Select options
We use cookies on our website to give you the most relevant experience by remembering your preferences and repeat visits. By clicking “Accept”, you consent to the use of ALL the cookies.
Cookie settingsACCEPT
Manage consent