THIS IS A PREORDER. SHIPPING STARTS ON OR AROUND OCTOBER 26TH.

In early 2016, Ireland's ZEALOT CULT self-released their debut EP, Karmenian Crypt. Duly impressed by this young quartet's power and poise, BLOOD HARVEST stepped in and released Karmenian Crypt on 12″ vinyl later that autumn. Quickly, Karmenian Crypt reaped critical acclaim, and for good reason: here was a band mature beyond their years, seemingly effortlessly crafting pure and total DEATH METAL that was simultaneously timeless and modern. Alas, those three songs were just a teaser for more mastery to come, and it's now arrived in the full-length Spiritual Sickness.

Instantly upon pressing “play” on Spiritual Sickness, this is the same whirlwinding ZEALOT CULT of before, only taken to bolder and more bellicose ends. Here exist those same strong, expertly integrated influences from classic Floridian death metal and especially the early Roadrunner/RC catalog which fostered same. And yet, ZEALOT CULT further manage to make epic, multi-dimensional majesty from that firm foundation, their compositions constantly rising and falling and taking dark 'n' doomed directions, all while remaining immediately memorable. So, while various strains of Pestilence, Death, Morbid Angel, and especially Obituary can be heard loud 'n' clear across Spiritual Sickness, its eight songs build upon said foundation and contribute to this rich legacy, underlining the unyielding ties to tradition whilst making majesty in modern times.

Completed by clear-yet-crushing production and a fully satisfying 42 minutes, Spiritual Sickness is indeed aptly titled. The time is NOW to join the ZEALOT CULT! 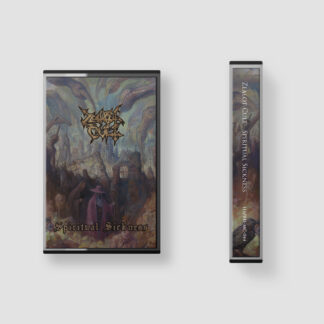 You're viewing: ZEALOT CULT – Spiritual Sickness CASSETTE 80.00 kr
Add to cart
We use cookies on our website to give you the most relevant experience by remembering your preferences and repeat visits. By clicking “Accept”, you consent to the use of ALL the cookies.
Cookie settingsACCEPT
Manage consent