Grandiose and flawlessly unpredictable, “INTERDIMENSIONAL INVOCATIONS” is an intimidating display of compositional eccentrism, otherworldly technical mastery and of mind-bending fretwork annihilation that will draw the listener into a warped and kaleidoscopic maze of mutated and futuristic heavy metal wizardry.

With influences ranging from Voivod to Atheist, Bal Sagoth, Death, and various forms of power and progressive metal, the core to the band’s sound is a critical mass of constant motion always on the verge of implosion that cyclically restabilises itself into slower lysergic dirges before condensing and collapsing again in a constant motion of compositional chaos and creation/destruction that rips the listener’s senses to shreds. 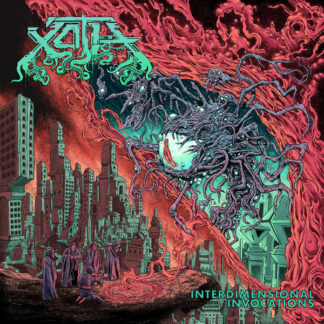 You're viewing: XOTH – Interdimensional invocations LP (Black Vinyl) 180.00 kr
Add to cart
We use cookies on our website to give you the most relevant experience by remembering your preferences and repeat visits. By clicking “Accept”, you consent to the use of ALL the cookies.
Cookie settingsACCEPT
Manage consent