VOIMATON is a word of Finnish origin, which loosely translated means “powerless.” Fittingly, the band's lyrical themes center around the failings of humanity, nihilism, and feeling powerless in the face of nature’s cruel inflictions upon mankind. Even more fittingly, VOIMATON's brand of death-doom blends crushing traces of Cianide and Saint Vitus with the off-kilter weirdness of '90s Finnish death metal. It's a sick sound that's simultaneously familiar yet refreshing.

The conception of VOIMATON began immediately following the demise of local outfit Narcotic in 2016, whose lineup included Dave Tibbets and Pat O’Hara. While VOIMATON had no official name at the time, and despite numerous false-starts throughout 2017 and 2018, Dave and Pat finally welcomed Henry (ex-Sable Beldam) into the fold in November 2018 to help bring VOIMATON into the physical realm, solidifying the trio. Wasting no time in digitally releasing a three-track demo in 2019, VOIMATON are now having Demo 2019 released physically on cassette tape, courtesy of new label home BLOOD HARVEST. Currently, the band is in the process of writing new material for their BLOOD HARVEST debut album. 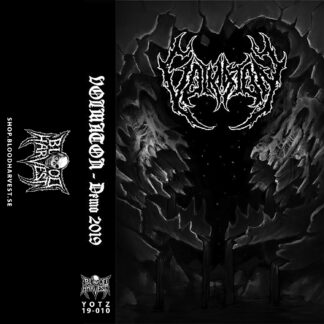 You're viewing: VOIMATON – Demo 2019 CASSETTE 65.00 kr
Add to cart
We use cookies on our website to give you the most relevant experience by remembering your preferences and repeat visits. By clicking “Accept”, you consent to the use of ALL the cookies.
Cookie settingsACCEPT
Manage consent