Official remastered reissue of the solitary full-length, originally released in 1992, by this Japanese band.
Including 4 bonus tracks that were previously only available on the “Recollected Limbs” compilation.
Featuring Takashi Tanaka (Anatomia, Necrophile, Wormridden) on drums and vocals.
“Ether for Scapegoat” is all about crushing, suffocating and foul-smelling Death/Doom Metal with an eerie atmosphere and a surreal edge, sure to please fans of all things heavy and rotting with a highly original touch. Awesome filth from the land of the decaying sun!

The layout, handled by Ted Tringo (Dark Symphonies / The Crypt), is designed after the original 1992 Cyber Music CD release, taking elements from the original layout with attention to detail, even down to the logo and typeface for a touch of nostalgia. This CD is a repress of our own Memento Mori reissue CD released in 2015. 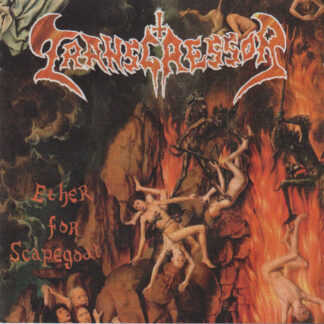 You're viewing: TRANSGRESSOR – Ether for Scapegoat CD 125.00 kr
Add to cart
We use cookies on our website to give you the most relevant experience by remembering your preferences and repeat visits. By clicking “Accept”, you consent to the use of ALL the cookies.
Cookie settingsACCEPT
Manage consent