BLOOD HARVEST RECORDS is proud to present on CD format R.I.P., the split album between TAPHOS NOMOS and URÐUN. Originally released earlier this year on limited-edition cassette, R.I.P. showcases two rottenly fresh newcomers in the international death metal underground. TAPHOS NOMOS are up first, offering three five-minute tracks. Hailing from the US, theirs is a restlessly roiling sound, moving from festering doomed-out death to a more uptempo-yet-angular sort that retains a uniquely lurking menace. With an EP and two demos already to their name, TAPHOS NOMOS are quickly becoming a diabolic force to be reckoned with, and here on R.I.P., they get the gutted production their fetid filth so requires. For their part, Iceland's URÐUN are no less filthy, offering five comparatively quicker tracks rounded out by an Autopsy cover, but charge forward with a thick 'n' viscous Metal of Death. They match well here with TAPHOS NOMOS since they frequently dip into doom, especially on the epic “Grafir & Bein,” but URÐUN's expertise is pure, pustulent headbanging DEATH. With just a demo to their name so far, R.I.P. serves as a righteous introduction to their deathlier side of Iceland. Behold TAPHOS NOMOS and URÐUN and let 'er R.I.P.! 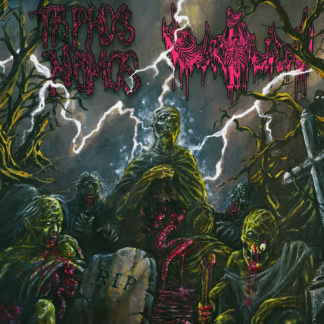 You're viewing: TAPHOS NOMOS / URÐUN – R.I.P CD (Blood Harvest) 100.00 kr
Add to cart
We use cookies on our website to give you the most relevant experience by remembering your preferences and repeat visits. By clicking “Accept”, you consent to the use of ALL the cookies.
Cookie settingsACCEPT
Manage consent