Second pressing, on gold vinyl, has left the factory and is on it's way to us right now!

BLOOD HARVEST RECORDS is proud to present SUFFERING HOUR's highly anticipated debut album, In Passing Ascension. One of the most exciting new bands BLOOD HARVEST has had the pleasure of hearing, SUFFERING HOUR exhibit a power and maturity that exceeds their otherwise short existence. Theirs is a death metal that defies most modern paradigms, safely eluding prevailing trends whilst driving deep into the heart of timeless DEATH METAL art, evoking mysticism as surely as molten crush, songwriting class as surely as hideous chaos, with a serpentine flow like no other.

As a title, In Passing Ascension is thus apt. There's something elusively transcendent about the sonic wormholes SUFFERING HOUR create here, something that sounds plucked effortlessly from the ether whilst being grounded in the dirt and grime and filth of the earth – and, surely, the foundation of death metal itself. It's a sensation of floating across suspended terra firma, as paradoxical as that may read on paper. For verily, SUFFERING HOUR have mastered the art of extremes: melodicism vs. miasma, space vs. swarm, tech vs. hypnosis, osmosis vs. disintegration, death metal as art vs. death metal as death metal.

In Passing Ascension therefore is an experience in and of itself, a virtual world in which to roam (and perhaps get lost). With suitable (and suitably stirring) cover art created by Witchrist's Alexander Brown, In Passing Ascension shall soon be hailed as one of the year's mightiest death metal debuts.

A statement from the band reads: “SUFFERING HOUR are proud to announce our allegiance with Swedish label BLOOD HARVEST. We will be releasing our debut album, In Passing Ascension, on CD and on black and colored wax. BLOOD HARVEST has done releases for some of our personal favorite bands, such as ALTARS, IMPETUOUS RITUAL, and ADVERSARIAL, just to name a few. We are extremely excited to be working with a label of this quality in every respect of the word, and we're 100% sure Rodrigo will be doing our album justice. In Passing Ascension is an album we have been working on since summer of 2014, and after years of hard work, we're ready to present the album to you all. The album is our take on cosmic blackened death metal, with themes deeply rooted in nihilism and cynicism. Some of the big influences on this album range from Inquisition and Mgla to The Chasm and Dead Congregation. There will be more news coming soon, so stay tuned.”
(Nathan T. Birk) 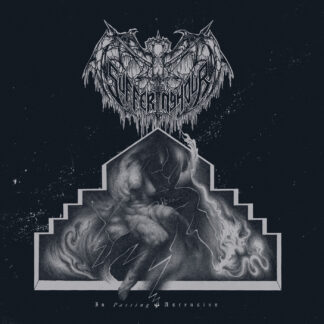 You're viewing: SUFFERING HOUR – In Passing Ascension 12″LP (Gold Vinyl) 170.00 kr
Add to cart
We use cookies on our website to give you the most relevant experience by remembering your preferences and repeat visits. By clicking “Accept”, you consent to the use of ALL the cookies.
Cookie settingsACCEPT
Manage consent