Pre-Order!!
We will ship out all pre-orders for these before the end of the year although the official release date will most likely be set for Jan. 2018.

As part of an onslaught of new short-length assaults, BLOOD HARVEST RECORDS is proud to present SHAMBLES' Primitive Death Trance on digipack CD and 12″ vinyl formats.

SHAMBLES hail from Thailand, and formed in 1997. Over the past 20 years, they've undergone an evolution from brutal grindcore to witching black metal to doomed-out death metal. They've accomplished all this across a handful of demos and splits, but at last, in 2016, they delivered their Realm of Darkness Shrine debut album, where the current SHAMBLES aesthetic has been nailed down cold. Indeed, it's as cold as the coffin, for their latest Primitive Death Trance EP delivers four absolutely DEAD tracks of absolutely gutted, doom-retching DEATH. Barbaric and stripped bare and yet subtly spiced with a hypnotic thrust that eventually overwhelms the senses, Primitive Death Trance is aptly fucking titled.

Death, doom, and the beyond: SHAMBLES take you there with their Primitive Death Trance. This recording is a precursor to the band's new album for BLOOD HARVEST, which should see release sometime next year.

12″MLP coming later. Pre-order will be up as soon as we have a delivery date from the plant. 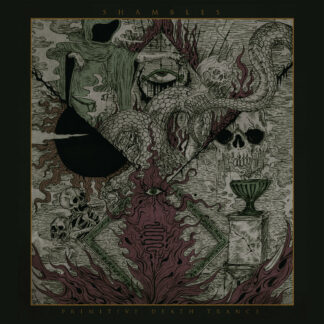 You're viewing: SHAMBLES – Primitive Death Trance MCD (Digi) 90.00 kr – 250.00 kr
Select options
We use cookies on our website to give you the most relevant experience by remembering your preferences and repeat visits. By clicking “Accept”, you consent to the use of ALL the cookies.
Cookie settingsACCEPT
Manage consent