Pre-orders accepted now!
Release date: November 10th, 2017
All orders including this item will ship as soon as we have the CD’s available, but now later than Nov. 10th.

BLOOD HARVEST RECORDS is proud to present SERPENTRANCE’s debut mini-album, The Besieged Sanctum, on CD & vinyl LP format. Originally released as a limited-edition cassette in early 2015, The Besieged Sanctum introduced this Russian cult to the international underground with a lurking menace. Comprised of members hailing from such elite hordes as Pseudogod, Ill Omened, and Sickrites, SERPENTRANCE create a swirling, sulfurous maelstrom of ritualistic black/death trance. Both seemingly improvised and militantly martial, The Besieged Sanctum heaves its hulking mass in a deceptively doomed manner: always a sense of vertigo engulfs the listener, no matter the tempo – from sub-atomic crawl to blastbeaten bestiality – and textures bleed in and out like a lingering fog. Now amended with an exclusive bonus track, the 31 minutes comprising the 12″ vinyl version creates a gestating womb of eldritch dread and incantory solemnity. Enter The Besieged Sanctum with SERPENTRANCE… 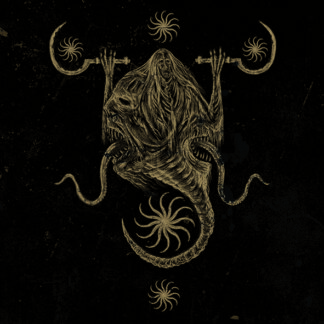 You're viewing: SERPENTRANCE – The Besieged Sanctum MCD 80.00 kr
Add to cart
We use cookies on our website to give you the most relevant experience by remembering your preferences and repeat visits. By clicking “Accept”, you consent to the use of ALL the cookies.
Cookie settingsACCEPT
Manage consent