There is little doubt that the Norwegian scene of the late 1980s and early 1990s was responsible for bringing the genre of black metal to the attention of the greater public. In the decades since, that scene has assumed a nearly mythical stature.
Formed in 1988, in Sarpsborg, Norway, under the name Disorder, the band quickly changed the name to Perdition Hearse, and began exploring darker sounds, crossing into the emergent black metal style, by infusing thrash and death metal riffs with its primitive and profoundly sinister atmosphere.
Perdition Hearse recorded the single song demo, “The Stealthy Beyond Death,” as well as the 1992 “Mala Fide” demo.
No further Perdition Hearse releases were ever made. Nevertheless, with these demo recordings, the band secured a prominent place in the annals of Norwegian black metal history.
This collection contains all of the band’s recordings, marking the first time Perdition Hearse has received a complete discography release. 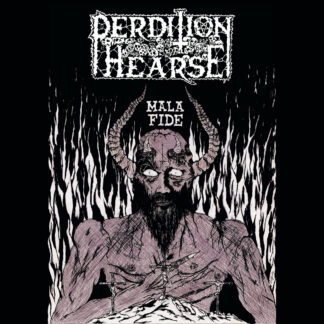 You're viewing: PERDITION HEARSE – Mala Fide LP 185.00 kr
Add to cart
We use cookies on our website to give you the most relevant experience by remembering your preferences and repeat visits. By clicking “Accept”, you consent to the use of ALL the cookies.
Cookie settingsACCEPT
Manage consent