MENTAL DEVASTATION – The Delusional Mystery Of The Self (Part 1) CASSETTE

THIS IS A PREORDER!
THIS ITEM STARTS SHIPPING ON OR AROUND DECEMBER 31st, 2021.

In 2013, Mental Devastation released their amazing album debut, “Red Skies”, containing 11 songs heavily influenced by the Bay Area, traditional Thrash Metal.
Now, after 8 years of silent work, Mental Devastation are finally releasing their second full length entitled “The Delusional Mystery of the Self. Part 1”. This album is the ideal mix of their various longtime musical influences, merging progressive passages alongside a conceptual idea which at the end developed into a Two part Opus….and this is only the first part!

For fans of Forbidden, Testament, Slayer or even Coroner. 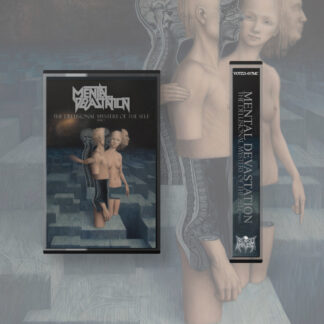 You're viewing: MENTAL DEVASTATION – The Delusional Mystery Of The Self (Part 1) CASSETTE 85.00 kr
Add to cart
We use cookies on our website to give you the most relevant experience by remembering your preferences and repeat visits. By clicking “Accept”, you consent to the use of ALL the cookies.
Cookie settingsACCEPT
Manage consent