Aptly titled, Luciferian Nightfall features two renegade hordes of Finnish black metal, both delivering exclusive material here. MALUM may have only formed in 2013, but they’ve been prolific ever since, delivering two full-lengths – most recently, Night of the Luciferian Light in 2017 via HELTER SKELTER – and a handful of EPs. On Luciferian Nightfall, MALUM deliver three epic tracks totaling 26 minutes: burning-cold/hot blackness of a most characteristically Finnish hue, emotive and driving and dedicated to the depths of the underground, and climaxing with the hypnotic 10-minute “Void.” LATHSPELL are no strangers to that underground, having formed in 1998 and releasing five albums to date, each one fine-tuning their proudly traditional Finnish black metal. On this split album, LATHSPELL likewise deliver three epics of their own, each one pulsing with fury and melody alike, raging and racing with a hammering tunefulness that perfectly complements their partners here. 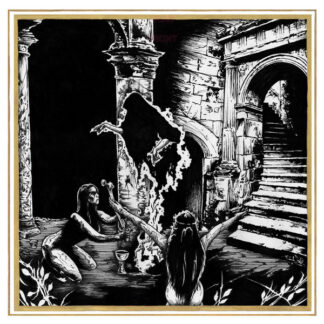 You're viewing: MALUM / LATHSPELL – Luciferian Nightfall (Split) LP 120.00 kr
Add to cart
We use cookies on our website to give you the most relevant experience by remembering your preferences and repeat visits. By clicking “Accept”, you consent to the use of ALL the cookies.
Cookie settingsACCEPT
Manage consent