Death Metal was always meant to be raw, rotten and bitter. Hailing from Newcastle upon Tyne, England, that’s the sound LIVE BURIAL have set for themselves. The debut ‘Forced Back to Live’ is now released by Dunkelheit Produktionen! Heavy Death Metal with slight touches of Doom, Sludge, Despair and a whole manner of unpleasantness! Expect intense bass energy, putrefied riffs and sick solos. Sounds that will pull you out from your premature death and force you into another wretched existence!

LIVE BURIAL recreate the macabre atmosphere and emotions that can only be found in memories of the late 80s/early 90’s. Riffs come out in masses, drums punch down like a sledgehammer, and vocals bellow out so haunting they summon the dead to terrorise the living! LIVE BURIAL have the potential to attract the whole scene. Only this way should Death Metal sound! Recorded at First Avenue Studios (Newcastle upon Tyne, UK) by Dave “The Mixing Desk Slave” Curle (SATAN, BLITZKRIEG, etc.). Mixing and mastering by Dan Lowndes of Resonance Sound Studios (CRUCIAMENTUM).

The album also features horror score merchant Slasher Dave (ACID WITCH) with a ghoulish composition to introduce the album. If you worship the sound of ASPHYX, PESTILENCE and early PARADISE LOST, your raw lust for old school Death Metal will be fulfilled by this album! 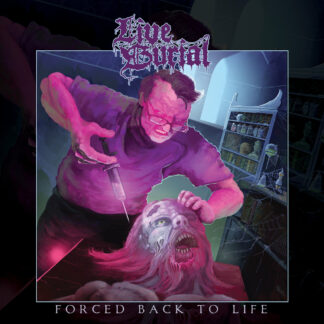 You're viewing: LIVE BURIAL – Forced Back To Life LP 100.00 kr
Add to cart
We use cookies on our website to give you the most relevant experience by remembering your preferences and repeat visits. By clicking “Accept”, you consent to the use of ALL the cookies.
Cookie settingsACCEPT
Manage consent