Turkish Death Metallers, Hellsodomy, have finally got their debut album released, and the name of the game is old school Death Metal that isn’t far removed from a similar approach that bands like Massacre (FL) and Morbid Angel did back in their early days.

Yes, fairly straightforward, old school to the bone Death Metal this certainly is, not bringing anything new to the table but still executed so enjoyably well that it’s hard to resist liking their style. It sounds like Hellsodomy have stuck to the late eighties period of the Death Metal movement and refused to update or modernize their sound even a bit. As said earlier, Florida’s Death Metal stalwarts Massacre often come to mind when listening to Chaostorm, added with some sinister elements that one could dig up from Morbid Angel’s early works (Thy Kingdom Come from 1987… Some of you still remember this?). Even vocalist and guitarist Nekro Kasil reminds me strongly of such lads as Kam Lee of Massacre and David Vincent of Morbid Angel vocal-wise, supporting very well Hellsodomy’s morbid and evil Death Metal hymns. I believe many of you surely do appreciate and like this wicked, old school Death Metal style.

Hellsodomy know that the wheel has already been invented, but they just decided to add some extra sharp and dangerous spikes and nails that make you hurt. – (metalcrypt.com) 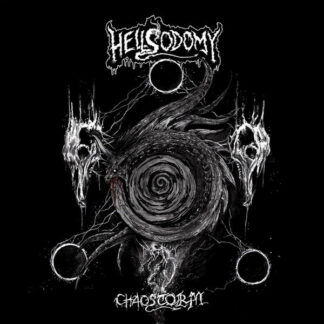 You're viewing: HELLSODOMY – Chaostorm LP 120.00 kr
Add to cart
We use cookies on our website to give you the most relevant experience by remembering your preferences and repeat visits. By clicking “Accept”, you consent to the use of ALL the cookies.
Cookie settingsACCEPT
Manage consent