FERETRUM – From Far Beyond CD

Overlooked and almost non-existent for the underground following (even on their homeland, Spain) when it was originally released on a limited cassette LP to 100 copies in 1993, Feretrum “From Far Beyond” really deserved much more than laying forgotten, buried by time and dust. Despite its overwhelming quality the album was originally almost unnoticed due to several aspects, even if it was a superlative piece of work: the decline of popularity of genuine death metal swallowed by the black metal explosion, the small pressing and lack of skills both from the label and the band in terms of promotion, the secondary role of the Spanish scene among foreignersâ€¦ And even so the record grew in popularity over the years as one of those hidden treasures that needed of time to be recognized and being properly rewarded. Two decades after its initial release Memento Mori Records rescued from the vault this tremendous opus of suffocating obscure riffs, unleashing it for the first time ever on CD early this year and now, comes its opportunity on vinyl due to the cooperation of Black Mass and Me Saco Un Ojo Records. Far away from being the countless ordinary re-release of these days just for the sake of being old and vintage, every serious dweller and lurker of the underground should at least, give this one a try to realize that there are still some few lost gems around, that are worth the effort and fill the gap they were meant to. 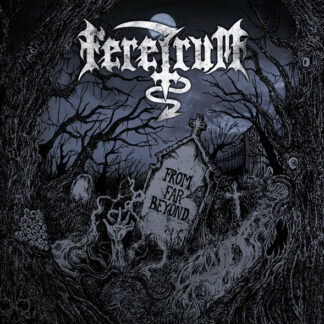 You're viewing: FERETRUM – From Far Beyond CD 120.00 kr
Add to cart
We use cookies on our website to give you the most relevant experience by remembering your preferences and repeat visits. By clicking “Accept”, you consent to the use of ALL the cookies.
Cookie settingsACCEPT
Manage consent