THIS IS A PREORDER. SHIPPING WILL START ON OR AROUND AUGUST 17th.

BLOOD HARVEST RECORDS and HELTER SKELTER PRODUCTIONS are proud to present long-overdue vinyl reissues of DISCIPLES OF POWER’s classic first two albums, Powertrap and Ominous Prophecy. Originally released on the cult Fringe Product label – which released albums by Sacrifice, Slaughter (Canada) and latter-day Razo, among many others – these first two DISCIPLES OF POWER albums are widely considered the band’s very best, and proved that mind-bending thrash sorcery was at its best in the great white north of Canada.

Originally released in 1989, when thrash was arguably at its creative and commercial peak, Powertrap boldly introduced DISCIPLES OF POWER to the worldwide metal scene. Here, this culmination of the band’s foundational first three demos up-ratcheted the intensity and gave further clarity to the band’s restlessly shifting but always tuneful constructs. For sure, it cemented DISCIPLES OF POWER’s name among Canada’s tech-thrash lineage, from founding fathers Voivod to heirs DBC onward. The full-length follow-up, 1992’s Ominous Prophecy, indeed came during an ominous time for thrash, when many/most were slowing down and looking for more mainstream audiences. Instead, DISCIPLES OF POWER stuck to their guns and simply made their tornado of souls more stunning. Heavier and more deathly, and even more ambitious in its songwriting – if anything, Ominous Prophecy is perhaps the band at the peak of their powers. 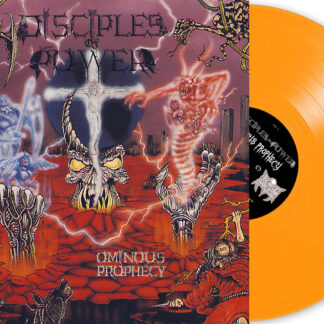 You're viewing: DISCIPLES OF POWER – Ominous Prophecy LP (Orange Vinyl) 170.00 kr
Add to cart
We use cookies on our website to give you the most relevant experience by remembering your preferences and repeat visits. By clicking “Accept”, you consent to the use of ALL the cookies.
Cookie settingsACCEPT
Manage consent