DEMONCY – Within The Sylvan Realms Of Frost LP (Gatefold)

Nuclear War Now! Productions continues its reissue campaign with Seattle black metal legion Demoncy, this one being the LP release of their second album Within the Sylvan Realms of Frost, making its definitive appearance on vinyl for the very first time. The title of the album is very indicative of the nature of the six tracks presented, the band, comprised of Synvorlath (vocals), Ixithra (vocals, keyboards, guitars), Zyuhlnic (bass), Vorthrus (drums), and Elsifer (guitars), do a fine job of conjuring up the cold, harsh winters of the Pacific Northwest much like the classic Norwegian black metal legends Mayhem, Emperor, Gorgoroth, Enslaved, Darkthrone, and Immortal. Synvorlath’s harsh wailing wafts over a onslaught of razor sharp, icy cold riffing and maniacal blast beats on standout cuts “Abysmal Shores of the Dark Lands”, “Winter’s Ancient Slumber”, and the brutal title track. There’s really no let up throughout the album, the band tearing through the dense forest and slaying everything in their wake, “The Final Battle for Our Glorious” especially savage in its intent and containing some of the most ferocious arrangements on the album. As such, for some, this is going to be a one dimensional affair, the bands constant barrage allowing for little subtlety or nuance to peek through, but there’s no denying the primal, raw power that Demoncy are able project, giving the album a truly frightening appeal. Brutal US black metal doesn’t get much better than this. 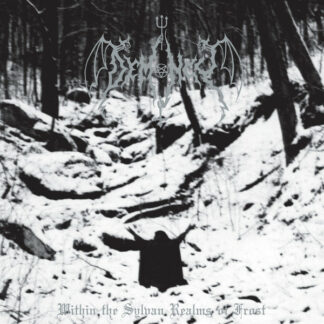 You're viewing: DEMONCY – Within The Sylvan Realms Of Frost LP (Gatefold) 200.00 kr
Add to cart
We use cookies on our website to give you the most relevant experience by remembering your preferences and repeat visits. By clicking “Accept”, you consent to the use of ALL the cookies.
Cookie settingsACCEPT
Manage consent