Absolutely as an homage to Morbid Angel’s ‘Love Of Lava’ and Trey’s obsession with the secret and obscure, this bonus disc includes all 31 individually titled lead breaks from the guitar AND bass that inhabit ‘Visitations From Enceladus’.

The solos on ‘Visitations…’ encompass a multitude of forms, on one hand we can have a very strict solo which follows the “rules” of the chord beneath, rarely straying from the diatonic scale notes and using patterns or catchy melodic lines to grab the listener. For example ‘Tumultuous Meridian Occurrence’, one of the main leads in the track ‘(Petrified In The) Hypogean Gaol’ stays true to the arpeggios of F# minor, D major and C# minor because they please the underlying A major and F# minor 9th chords.

Or on the other hand, music theory goes out the door and it’s kind of a free-for-all which can include strange outside-the-box techniques that confuse the schools of music. This plasma state is a place of total relaxation and focus that the human brain can enter; where nothing is true and everything is permitted.

One with the music, it is impossible to be self-conscious of mistakes because whatever is played is true to the moment, any missteps are supposed to happen. Water does not complain that it must traverse a meandering river, it is simply a path that is taken to reach the destination. Likewise, whichever direction you swerve next with your lead is simply a flavour that the song now has. We would recommend the books ‘Inner Game Of Music’ (Barry Green) and ‘Effortless Mastery’ (Kenny Werner) to learn more about this!

Every track has a snippet of the album’s story embedded in its title. When writing lyrics for anything, there are bound to be great lines that just have to be omitted. Be it because the rhythm doesn’t work or it’s too long to fit in a 4 bar ‘verse’ sequence. But with an adventure as eventful as ‘Visitations From Enceladus’, there were so many details to try to include effectively. The plasma provides a great opportunity to slip in this extra story information, accompany the lyrics and give extra character to the leads. Because the solos and plasma are indeed composed to compliment the adjacent happenings of the story.

‘Illumed In Cimmerian Shade’, taken from the climax of ‘Moonbelt Immolator’ is arguably a dissonant wall of noise, but beneath the effects pedal smog is a sequence that embellishes the rhythm guitars and then half way leaves room for another more precise solo to emerge simultaneously. It then hangs on for dear life whilst the secondary lead completes and continues its portrayal of the eerie inner corridors of the moonbase and what actually is enshrouded within the Cimmerian shade… 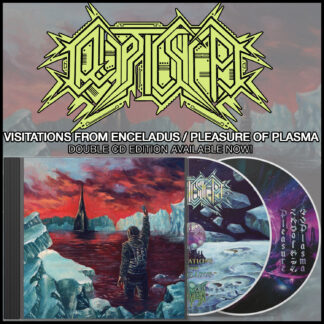 You're viewing: CRYPTIC SHIFT – Visitations From Enceladus – Pleasure Of Plasma 2xCD 135.00 kr
Add to cart
We use cookies on our website to give you the most relevant experience by remembering your preferences and repeat visits. By clicking “Accept”, you consent to the use of ALL the cookies.
Cookie settingsACCEPT
Manage consent