Hailing from Southern California, CREMATORY STENCH formed in 2014 and released their self-titled debut EP two years later. Then a trio, the band's sound was a thrashing take on late '80s death metal, largely nodding to early Death and Pestilence. Now expanded to a quartet and having been a prolific force on the live front, CREMATORY STENCH's attack has but gotten nastier, gnarlier, and creepier. One could argue that with Grotesque Deformities, they have entered the very early '90s, owing as they do to the gutsfuck sounds coming from Sweden then. Either way, it's utterly hellish.

But, on evidence of this new second EP, CREMATORY STENCH are just getting started and will undoubtedly get darker and more disgusting. Jump on their bandwagon now and witness their Grotesque Deformities! 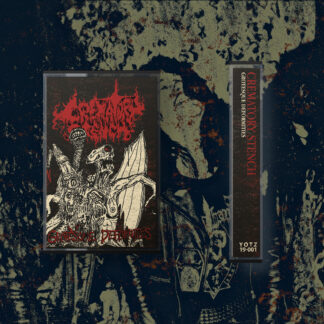 You're viewing: CREMATORY STENCH – Grotesque Deformities CASSETTE (2nd Press) 70.00 kr
Add to cart
We use cookies on our website to give you the most relevant experience by remembering your preferences and repeat visits. By clicking “Accept”, you consent to the use of ALL the cookies.
Cookie settingsACCEPT
Manage consent