CONSUMMATION – The Fires of Calcination LP

Sentient Ruin and Australian extreme metal tormentors Consummation seal an unholy blood pact to re-release their first two debut EPs through an exhaustive and extremely curated vinyl release. A decade-spanning retrospective, “The Fires of Calcination” is a limited edition 12″ LP compilation containing every track ever released by the band (taken from their 2012 debut demo tape and from the “Ritual Severance” CD EP released in 2017 by Invictus Productions) leading up to their 2019 Profound Lore debut album – “The Great Solar Hunter” – all of which also see their first ever release on the vinyl format. The four tracks present on the comp testify with harrowing vehemence the birth and evolution of one of the most defiant and predatory black metal entities to ever tread Australian soil, and documents the band’s feral quest for complete aural domination/annihilation over the span of a decade, as they meticulously and malignantly forged their black metal craft to become a mortal weapon of unyielding violence and negativity. 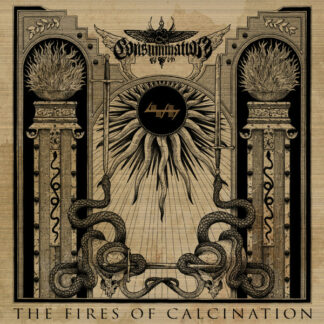 You're viewing: CONSUMMATION – The Fires of Calcination LP 185.00 kr
Add to cart
We use cookies on our website to give you the most relevant experience by remembering your preferences and repeat visits. By clicking “Accept”, you consent to the use of ALL the cookies.
Cookie settingsACCEPT
Manage consent