Originally released in 2019 on CD and cassette, Larvae Tedeum Teratos saw CENOTAFIO cement their position as one of Chile’s best new-breed black/death bands – no mean feet, given the rich history of Chilean underground metal and its ever-thriving scene that’s arguably even stronger today. Then again, the duo comprising CENOTAFIO are no mere newcomers, as both members have been playing in a number of hordes for over a decade, but both together in the esteemed Invehertex…

Nevertheless, as CENOTAFIO, the duo of drummer/vocalist Patricio Kusnir and guitarist/bassist/vocalist Daniel Hermosilla have created a considerable canon in just five years together. A demo and a couple singles introduced the band initially, but it was 2017’s La fatídica excrecencia de la subtierra debut album which put CENOTAFIO’s supremely sepulchral ways on the international metal map. Amazingly, the duo topped that feat with the follow-up Larvae Tedeum Teratos. A more concise but somehow simultaneously more sprawling work, CENOTAFIO’s second album spread tendrils of terror and tension across the helpless listener and refused to relent its dread hold. Effortlessly shifting between ripped ‘n’ roiling speed and drowning-in-the-deep doom, Larvae Tedeum Teratos created a horrific world, its ceaselessly humid and punishingly physical soundfield wielded as almost an instrument onto itself. Blackened death metal, deathened black metal, blackdeathdoom, whatever you want to call it: CENOTAFIO truly arrived with this album.

Fans of the band since the beginning, BLOOD HARVEST is honored to be finally unleashing CENOAFIO’s Larvae Tedeum Teratos on the format it so deserves – vinyl! 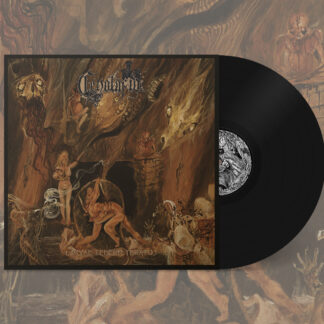 You're viewing: CENOTAFIO – Larvae Tedeum Teratos LP 170.00 kr
Add to cart
We use cookies on our website to give you the most relevant experience by remembering your preferences and repeat visits. By clicking “Accept”, you consent to the use of ALL the cookies.
Cookie settingsACCEPT
Manage consent