THIS IS A PREORDER!
This item will start shipping on or around December 10th!

BLOOD HARVEST RECORDS is proud CADAVERIC FUMES’ long-awaited first (and final) album, Echoing Chambers of Soul, on CD, vinyl LP, and cassette tape formats. The CD and tape versions will be released on December 10th while the vinyl version will follow in January 2022.

“It has been five years long wandering. Five years of efforts trying to reinvent our sound, searching for a meaning to keep on playing this beloved genre of music. Through sweat and blood. This meant experimentations, lineup re-structuration, songs written then thrown in the bin, exhaustion.

“But here we are. Ten years after the inception of the band, it is here. Our debut and final album, Echoing Chambers of Soul.

“We dreamt this record for a long, long time. Burning ourselves into it until we burn the band itself. But the result is our biggest pride, and we hope you’ll like it as much as we do.

Since their formation in 2011, CADAVERIC FUMES were at the forefront of France’s now-burgeoning death metal scene. Patiently, they perfected their craft over the course of a debut demo in 2012, a split mini-album with Demonic Oath in 2014, and especially the breakout Dimensions Obscure mini-album in 2016, courtesy of BLOOD HARVEST. At once classically inspired and tastefully forward-thinking, on Dimensions Obscure did CADAVERIC FUMES forego the all-manic/all-the-time morbidity for a highly dynamic and nuanced take on death metal. Granted, flashes of mid ’80s insanity and early ’90s darkness remained, but a cool confidence was at play here, heightening the songcraft to inflict both maximum cranial damage and spiritual atmosphere. Indeed, the sky seemed the limit…

Or perhaps it was the abyss? For CADAVERIC FUMES stayed patient yet quiet, releasing a three-song demo in 2017 and then a split 7” with fellow French comrades Skelethal the next year, and now arrives their final recording, which just so happens to be their first full-length: Echoing Chambers of Soul. Going out on the grandest of notes, CADAVERIC FUMES’ first/final album keeps one foot planted in the band’s not-inconsiderable past and another in equally-dazzling new territory. Truly, Echoing Chambers of Soul is aptly titled, for there’s an ominously spacious MURK here – but unlike so many trendy “cavernous” bands of the past decade, CADAVERIC FUMES are skilled songwriters (keenly note SONG) and are equally skilled at finding that elusive nexus between “pure” and “progressive.” There’s a stomp and strut here that’s stultifying to behold – pure early ’90s panache, and authentically so – but then arises from that murk godly leads and other finessed touches of texture, making Echoing Chambers of Soul both spirit-crushing and -uplifting. We’d even deign to call it “beautiful” if not for the ever-present darkness so central to death metal…and then, like that, CADAVERIC FUMES fade to the ether and cease to exist.

An exquisite corpse is left behind, and we’re all to wonder what might’ve been? “CADAVERIC FUMES has always been a band of friends,” they say. “We started as a three-piece band with no real ambitions other than playing the brand of death metal we love. Then we had a demo out and our name started circulating in the underground, which solidified us as a real band. But friendship, like family, sometimes has its flaws, and as the years went by, some of us lost interest in keeping CADAVERIC FUMES their main priority. In respect for this friendship that goes beyond any band feuds, we decided to end this ten-year-long ride on good terms, releasing an album we have teased for years and dreamt for even more.”

CADAVERIC FUMES respectably break up and leave behind what’s bound to be a modern classic. A veritable portrait of (death metal) Dorian Gray, enter Echoing Chambers of Soul forevermore. 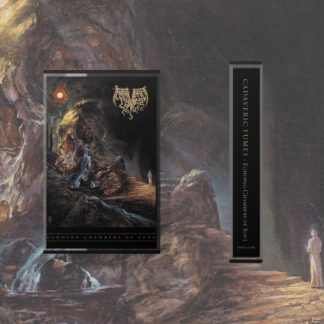 You're viewing: CADAVERIC FUMES – Echoing Chambers of Soul CASSETTE €9.45
Select options
We use cookies on our website to give you the most relevant experience by remembering your preferences and repeat visits. By clicking “Accept”, you consent to the use of ALL the cookies.
Cookie settingsACCEPT
Manage consent