BUNDLE: VACUOUS DEPTHS – Corporal Humiliation CASSETTE (One of Each)

THIS IS A PREORDER!
This item will start shipping on or around November 4th, 2022.

Blood Harvest Records, in conspiracy with Chaos Records and Goat Throne Records, is proud to present VACUOUS DEPTHS’ highly anticipated debut album, Corporal Humiliation.
Cassette version will be handled by Blood Harvest & Goat Throne Records, CD version by Chaos Records.
The vinyl version will follow in 2023, and will be a combined effort by all three labels. Official release date to be announced.

In 2017, guitarist/vocalist Austin Thomas formed VACUOUS DEPTHS in Tampa, Florida – the birthplace of death metal. He recruited drummer Christ Wotring and bassist Doug Gialluca, and promptly recorded a digital-only six-song demo. After a handful of shows, both Wotring and Gialluca exited the group. Thomas would not be deterred, and took his heavy churning songs with him. Re-formed and reinvigorated, VACUOUS DEPTHS launched in to 2019 with new bassist Arturo Palomo and with a re-release of their 2017 six-song demo on Texas label Goat Throne Records. Joined by new drummer Dustin Rogers, the band entered The Hum Depot studio with Dan Byers in October of 2021 to record their debut full-length, Corporal Humiliation.

A grand entrance, to say the very least, Corporal Humiliation disgustingly displays VACUOUS DEPTHS at their rawest, most furious, and most uncomfortable. Not just typical Tampa death metal – although, undeniably, those are the band’s roots – here VACUOUS DEPTHS drown in the influence of primitive late 1980s and early 1990s death metal as a (w)hole: only the most wretched and wrong sounds abound. A true DEATH METAL record for true death metal diehards, nevertheless do the power-trio put their own twist on the pummeling sounds from some of the most notorious scenes of Finland, Mexico, and South America. And at 10 songs in a murderously swift 34 minutes, Corporal Humiliation does exactly what it says on the tin and gets the fuck out before the perpetrators get caught. Evil deeds done dirt cheap? Truly, these are VACUOUS DEPTHS…

Be the first to review “BUNDLE: VACUOUS DEPTHS – Corporal Humiliation CASSETTE (One of Each)” Cancel reply 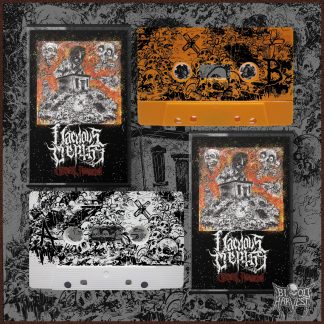 You're viewing: BUNDLE: VACUOUS DEPTHS – Corporal Humiliation CASSETTE (One of Each) 165.00 kr
Add to cart
We use cookies on our website to give you the most relevant experience by remembering your preferences and repeat visits. By clicking “Accept”, you consent to the use of ALL the cookies.
Cookie settingsACCEPT
Manage consent