THIS IS A PRE-ORDER!
THIS ITEM STARTS SHIPPING ON OR AROUND DECEMBER 17TH.

BLOOD HARVEST is proud to announce CHARNEL ALTAR’s highly anticipated debut album, Abatement of the Sun, on CD, vinyl LP, and cassette tape formats.
The CD and cassette versions will be released on December 17th, while the vinyl version will follow next year.

Hailing from Adelaide, Australia’s CHARNEL ALTAR formed in late 2018. Not long after, the band’s self-titled debut demo followed in January 2019. Originally self-released digitally, a cassette version was soon released by Desert Wastelands Productions and a 12″ vinyl version by Seed of Doom Records and Impure Sounds; a tape re-release then came in mid-2020 via Blood Moon Productions. With this underground momentum building, CHARNEL ALTAR released a split EP with fellow Aussies CARCINOID, which was released on tape by Headsplit Records and on 10″ vinyl once again by Seed of Doom.

During all this, CHARNEL ALTAR became a prolific force on the live front. Their first show was supporting Uada, and they went on to play with the likes of Incantation, Krisiun, Integrity, Primitive Man, Faceless Burial, Gutless, Ignivomous, and Vile Apparition. A tour with CARCINOID was planned for 2020, but was unfortunately cancelled due to the Coronavirus pandemic.

Nevertheless, CHARNEL ALTAR make their full-length debut with the slimy ‘n’ stultifying Abatement of the Sun. Horrific and harrowing, churning and gestating with utter dread and doom, CHARNEL ALTAR’s death metal is like a slo-mo melting of mind and matter. One could arguably qualify it as death-doom, but the band’s version of such evades easy categorization and aims more for hovering tension and paradoxically spacious density – indeed, like old(er)-school death metal dragged through tar but trudging forward like a tank. That all three members previously played together in the cult Tombsealer – who toured nationally in support of Mournful Congregation and played with such acts as Dead Congregation, Portal, Fetid, Windhand, Cough, Inverloch, and Nocturnal Graves to name a few – shows in their seemingly effortless execution, that these dreadful ‘n’ doomed-out ruminations have been simmering in their hearts for time eternal. Or, put another way, Abatement of the Sun is all-too-perfectly titled: the end is not just nigh; it’s NULL. 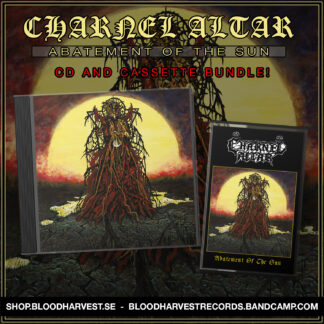 You're viewing: BUNDLE: CHARNEL ALTAR – Abatement Of The Sun CD & CASSETTE 195.00 kr
Select options
We use cookies on our website to give you the most relevant experience by remembering your preferences and repeat visits. By clicking “Accept”, you consent to the use of ALL the cookies.
Cookie settingsACCEPT
Manage consent