“Bulldozing the Vatican” – the title looks as if the members of Bulldozing Bastard are great fans of Exhorder. Yet this is a fallacy. Generally speaking, the music of the Germans can be roughly categorised as thrash metal. But their indecent noise has nothing in common with the sharp American riff attacks of the mid-eighties that built the basis for the fame of groups such as Exodus, Forbidden or, well, Exhorder. Instead, Bulldozing Bastard belongs to the bands such as Warfare and Blizzard. This means that they operate at the interface of well-known triumvirates. You guessed it, I am thinking of Venom, Motörhead and Tank. To be more explicit, I refer to the early configurations of these noisy and uncouth formations. Bulldozing Bastard has adopted their attitude. A dirty voice falls in love with rumbling guitar lines and the result is a filthy monster of black thrash metal. The average velocity leaves nothing to be desired and some additional sleazy elements of rock and roll show up occasionally. Finally, the band is also slightly inspired by the punk genre. To draw a first summary, the album sounds like an ugly grease spot that wants to demonstrate its musical talents. And, of course, I like its sounds.

Aesthetes may say that the 31 minutes of sonic obscenity lack of substance. On the one hand, they are probably right in view of the simple compositions. The bulldozer boys choose a minimalist approach. On the other hand, this sordid type of music is not interested in delivering depth or high sophisticated techniques. This was definitely not the intention of its inventors. Straightness and a certain amount of primitiveness shape the songs in an appropriate manner. It is therefore relatively useless to discuss about albums like “Bulldozing the Vatican”. They write a further chapter of the “love it or hate it” story. No matter which side you choose, you will have good arguments for your opinion.

The valid arguments for the “love it” fraction are unpolished yet catchy choruses with dynamic and well-accentuated gang shouts, effective guitar lines and a fine degree of harshness and reek. It does not make sense to pick out individual songs. The quality differences are negligible. Perhaps the first half of the full-length is a little bit more thrilling, but at last it does not matter. Bulldozing Bastard offers an homogeneous stream of atrociousness. By the way, to talk about the more or less moronic lyrics is not really necessary. The song titles speak for themselves and it is helpful to be not allergic against metallic stereotypes. So what? More important is the fact that the band does not lack of integrity.

The muddy production proves that the three ruffians know how this manifestation of metal has to be presented. It covers the song material with a layer of dirt and obfuscates any kind of technical tricks, if they exist at all. And it goes without saying that synthetic keyboards, female vocals and any other senseless ingredients are also absent. Bulldozing Bastard is a credible metal band, not an orchestra of soulless mercenaries. Thus, call it shabby entertainment for good people or good entertainment for shabby people – you are right in both cases and the album fulfills its purpose. – (Felix 1666 – Metal-Archives.com) 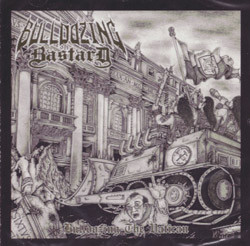 You're viewing: BULLDOZING BASTARD – Bulldozing The Vatican LP 100.00 kr
Add to cart
We use cookies on our website to give you the most relevant experience by remembering your preferences and repeat visits. By clicking “Accept”, you consent to the use of ALL the cookies.
Cookie settingsACCEPT
Manage consent