With the release of their new EP, Boethiah takes the template of their self-released debut and ventures to far-flung, interstellar dimensions, with 6 tracks of sinister, cosmically crushing death metal. Celestial Gateway captures the classic HM-2 Swedish sound of the early ‘90s and infuses it with a hallucinatory, science fiction theme, while simultaneously expanding on the memorable, darkly melodic songs, ferocious hooks, and riff-heavy chug that marked their full length debut. It’s an insidious integration of the past and the future and a transcendental journey through time and space. Cover art by Raul Gonzalez. For fans of: Dismember, Morbid Angel, Horrendous, Fleshcrawl…

“Boethiah …are prepared to take old-school death metal back into the stratosphere and propel us back into the “Lake of Fire” created by Nocturnus, while still being steeped in plenty of Grave, Dismember and Bolt Thrower to keep HM-2 enthusiasts happy.” – (Decibel)

“Drifting Into the Void” is a prime example of Boethiah‘s unusual ability to integrate the revered HM-2-powered tone of Swedish death metal with alien musical ingredients that send the listener’s imagination out into the chilling vastness of the interstellar void. It’s not for naught that their music has been characterized as “an insidious integration of the past and the future” – (No Clean Singing)

“Each track is a well crafted slaughtering …well written, well crafted and haunting…one the most exciting new death metal bands out there” – (Cadaver Garden).

“Boethiah load their spacecraft full of BOSS HM-2s and get blasted deep into galaxies beyond on their new EP, Celestial Gateway. Comprised of buzzsaw guitars, cosmic atmospheres, and cavernous vocals, this California duo attempt to give the modern death metal sound a fresh and interesting facelift” – (Svbterranean). 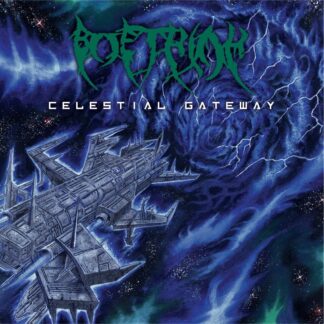 You're viewing: BOETHIAH – Celestial Gateway MCD 90.00 kr
Add to cart
We use cookies on our website to give you the most relevant experience by remembering your preferences and repeat visits. By clicking “Accept”, you consent to the use of ALL the cookies.
Cookie settingsACCEPT
Manage consent