PREORDER!
This item and orders including this item, ship on or around March 30th.

This is Death Metal that comes from the sewers. Heavy and sickening. Demented and disturbing. Not for the faint of heart, or those with weak constitutions. Equal parts ripping and massive, catchy and disgusting. This CD compiles Ruin's various demos & splits between 2015 & 2017. Adding up to a vile masterpiece of relentless terror.
Spread Plague Hell (Cassette)
Split w/ Thy Feeble Saviour (Cassette)
Split w/ Ghoulgotha (7″EP)
Split w/ Violation Wound (7″EP)
Split w/ Anarchus (12″LP)

Let the ominous soundscapes draw you into hell. Then the heavy death will commence the brutal beating and savage murder. This death metal is the thing of nightmares, from the mind of a serial killer on LSD, while being influenced by Hellhammer covering a mix of the “Realm of Chaos” album and the “Vulgar Necrolatry” demo. 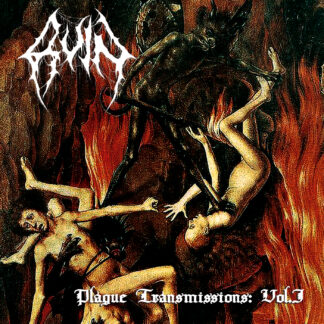 You're viewing: RUIN – Plague Transmissions (Vol​.​1) CD 120.00 kr
Add to cart
We use cookies on our website to give you the most relevant experience by remembering your preferences and repeat visits. By clicking “Accept”, you consent to the use of ALL the cookies.
Cookie settingsACCEPT
Manage consent