BLOOD HARVEST RECORDS is proud to present PORTA DAEMONIUM's debut album, Serpent of Chaos, on vinyl LP format. PORTA DAEMONIUM formed in Santiago, Chile in 1998 under the name Porta Salominiis. After several years, due to the designs of Hell to keep the essence of blackened, deathly metal music alive, in 2011 they changed their moniker to PORTA DAEMONIUM. Still, their foundation stayed strong, tethered to the old standards like Immolation, Dead Congregation, early Morbid Angel, Autopsy, Krisiun, and Angelcorpse among others.
PORTA DAEMONIUM is not a band that usually plays live or releases music in a physical format; in fact, to date, their recordings have all been largely self-released and digital. However, that will now change with the vinyl release of their debut album, Serpent of Chaos. Released digitally last year, Serpent of Chaos is blackened occult death metal perfection. Recorded at Torture Chamber Studios in Chile mastered by the legendary Tomas Skogsberg, here PORTA DAEMONIUM wield a massive, absolutely gutsfucking tone that will simply CRUSH all in its path. Along that path, the quartet burl forth through winding, wild caverns of evilness: the Serpent of Chaos has been unleashed! 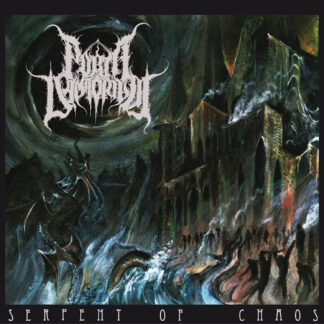 You're viewing: PORTA DAEMONIUM – Serpent of Chaos LP (Blood Harvest) 160.00 kr
Select options
We use cookies on our website to give you the most relevant experience by remembering your preferences and repeat visits. By clicking “Accept”, you consent to the use of ALL the cookies.
Cookie settingsACCEPT
Manage consent