BLOOD HARVEST RECORDS is proud to present OSSUARY INSANE's Demonize the Flesh, the second part of an ongoing endeavor to reissue this cult American death metal band's entire recorded works. Forming in that fateful year of 1991, OSSUARY INSANE were originally named Ossuary and released one demo under that moniker before changing it in 1995. As OSSUARY INSANE, they would undergo multiple lineups and release a trio of official demos and one album, Demonize the Flesh, in 1998. Through it all, the band would perfect a sound that was DEATH METAL incarnate – unremittingly dark, dynamic, and heavy as fuck – but offered tons of unique twists, all increasingly their own and executed with pinpoint precision. In many ways, OSSUARY INSANE took the well-known (and rightly so) Tampa death metal style down both weirder and more blackened routes, always challenging the listener while throttling the body. With Demonize the Flesh, the band truly burst upon the scene with a hungry 'n' harrowing sound that was equal parts youthful exuberance and mature-before-their-years confidence, locating a sound that was both immediately engaging and difficult to conveniently categorize. Although Demonize the Flesh was padded out with a slew of bonus tracks for its original CD release in '98, OSSUARY INSANE always wanted their debut album to be a stand-alone piece, as a tight 'n' taut set of six tracks in 30 minutes – and now, with the help of BLOOD HARVEST, that vision is realized…and, for the first time, on vinyl!

200 on White Vinyl
100 on Black Vinyl (Comes with embroidered Logo-patch).
Select Below. 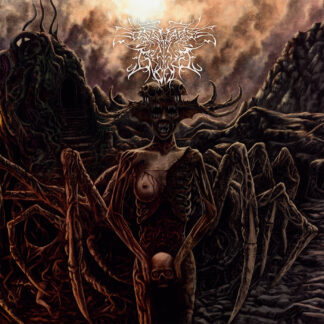 You're viewing: OSSUARY INSANE – Demonize The Flesh 12″LP 140.00 kr – 290.00 kr
Select options
We use cookies on our website to give you the most relevant experience by remembering your preferences and repeat visits. By clicking “Accept”, you consent to the use of ALL the cookies.
Cookie settingsACCEPT
Manage consent