Truly a mysterious and enigmatic entity, ORDER OF THE NAMELESS ONES released their debut demo in 2014 and have been patiently lying in wait, ready to unleash a full-length of devastating proportions. At last, it has arrived, with the ever-fitting title Utter to Me the Word of Wrath. True to its word, ORDER OF THE NAMELESS ONES here create eight churning ‘n’ coruscating tracks of cavernous, utterly barbaric DEATH METAL. Their barbarity is familiar in a sense, rooted as it is in the ancient days of the Metal of Death, but the overwhelming onslaught that ensues is suffused with Lovecraftian mythos and modern occultism, altogether creating an obscurity perfectly in line with their moniker. But let it be known that obfuscation, whether for its own sake or otherwise, is nowhere to be found here: ORDER OF THE NAMELESS ONES prize order and stridently exude a militancy that puts Utter to Me the Word of Wrath above the unwashed hordes of no-riff “caverncore,” their savage-yet-finessed storm of double-bass blasting and downtuned composition creating a clarity of form. And it works its serpentine, slipstreaming spell the deeper you go into the 29-minute album.

Born in abyssal chaos…sent from the void…to usher in the unknown… Open thy ears to ORDER OF THE NAMELESS ONES and Utter to Me the Word of Wrath. 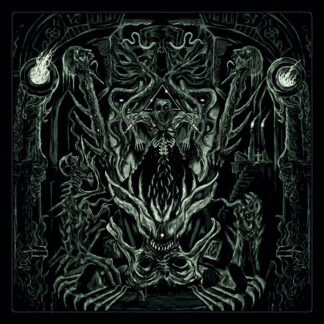 You're viewing: ORDER OF THE NAMELESS ONES – Utter to Me the Word of Wrath LP 165.00 kr
Add to cart
We use cookies on our website to give you the most relevant experience by remembering your preferences and repeat visits. By clicking “Accept”, you consent to the use of ALL the cookies.
Cookie settingsACCEPT
Manage consent